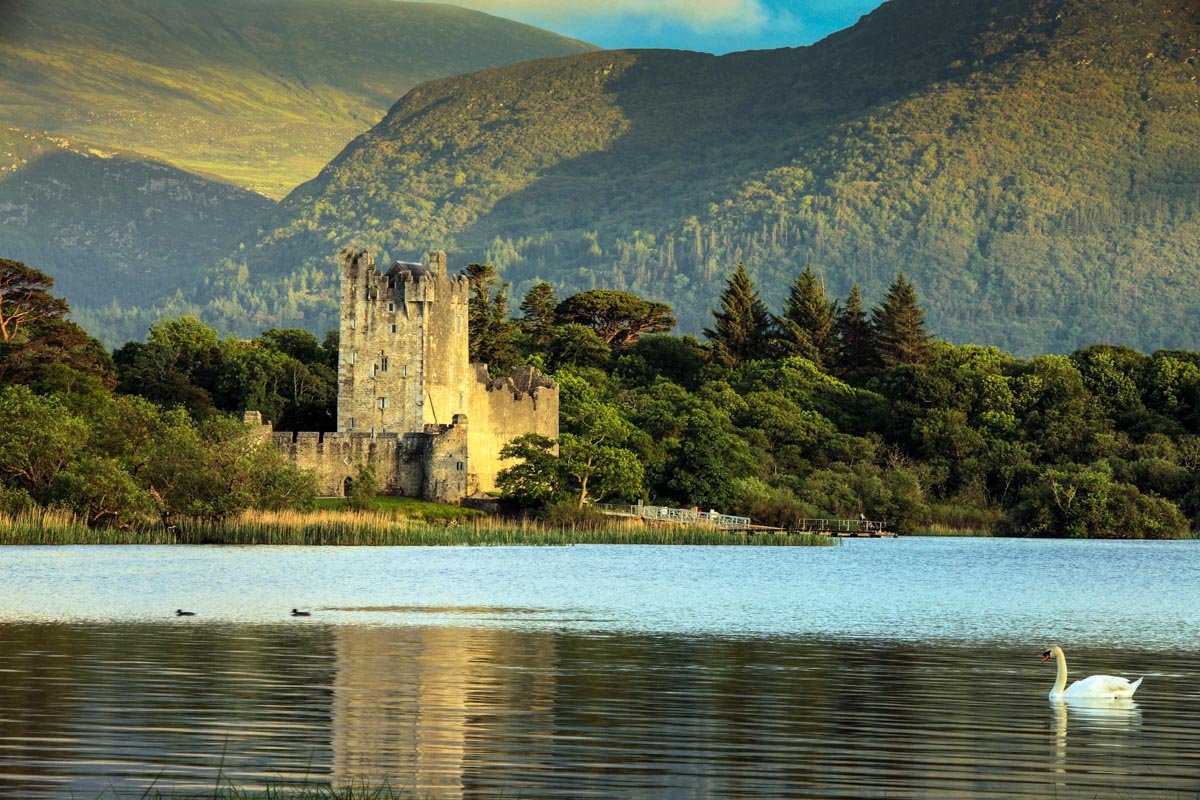 Cill Airne meaning the Church of Airne is a town with a strong Religious and Educational background. It is also home to some of the most beautiful tourist attractions Killarney and in Ireland such as Muckross House, Muckross  Gardens, Muckross Abbey, Castlelough Castle, Lake Hotel, Ross Castle & St Mary’s Cathedral along with Innisfallen Island home to Innisfallen Abbey and one of the main schools of learning in Ireland.  Killarney is ideally situated on the Ring of Kerry making it a very popular tourist attraction and an ideal base with easy access to the South West of Ireland.

St Mary’s Cathedral St Mary’s Cathedral is considered to be one of the most important gothic Churches of the 19th Century. It was used as a famine hospital and shelter during the 1840s. It was opened to the public in 1855. The cathedral consists of beautiful stained glass windows on both sides of the main aisle. It is opened daily to the public. Ross Castle Located only minutes from the Lake Hotel, Ross Castle is one of the most attractive 14th Century Castle in Ireland. Inside, it is restored in a 17th Century style. It was first built by O Donoghue Mór in the 14th Century and was eventually taken over by the McCarthy Mór. Today, it is a very popular attraction in Killarney as it is located overlooking the Lake where not only tourists visit on a daily basis but also locals as its host to beautiful scenic views and walking trails. There are daily guided tours available in the Ross Castle and Boat Trips available around the Lakes.  Gap of Dunloe The Gap of Dunloe from Irish Dún Lóich meaning Lóich’s stronghold. The Gap is narrow scenic mountain pass between the Purple Mountains and the McGillicuddy Reeks Mountains. The road through the Gap of Dunloe is very narrow so the Horse and Cart are very popular among tourists as it is a 7k walk.  Muckross Abbey Muckross Abbey was built in 1448 AD and it is open to the public all year round. It is well worth a visit and highly recommended as it is in good condition despite being raided many times.  There are three of Ireland’s greatest ever poets buried within the abbey from Kerry and the fourth is buried in the graveyard. Situated in the middle of the Abbey is the Yew tree which is said to be over 500 years old and it is said the Abbey was built around it  Muckross House Muckross House is a large Victorian House located in the middle of Muckross estate. It is located south from Killarney on the N71 and located 2 KM after The Lake Hotel on the right. Muckross House was built in 1843 by Henry Arthur Herbert and was once visited Queen Victoria in 1861. It is considered one of Ireland most popular tourist attractions. It allows people to experience for themselves the way people would have lived in the 18th Century & 19th Century. Muckross House is open to the public and also gives guided tours. Inside Muckross Park, there is also Mucros Craft Centre where tourists have a variety of Irish craftsmanship and Irish merchandise to choose from. Muckross House Guided Tour times are: 2.00pm, 3.15pm, & 4.30pm. Killarney National Park Killarney National Park was the first national park in Ireland. It was founded in 1932 and expands over 25,000 acres.  Within the park, you will find the Lakes of Killarney, Torc, and Mangerton Mountain. The National Park is worldwide known for its incredible scenery and is very popular not just with tourists but also locals. Muckross Traditional Farms Muckross Traditional Farms is a wonderful experience for tourists to experience how Irish people lived in the 1930s and 1940s. Tourists can visit three Irish farms and experience the different chores Irish people had to do on a daily basis. The farms are of different in size starting from the smallest to the largest.  Muckross Gardens Muckross Gardens is one of the most beautiful gardens in Ireland. It is over fifty acres of garden and consists of natural limestone rockery, large lawn areas, water garden, beautiful bright flowers, & trees. It has beautiful collections of Azaleas, & Rhododendron in the park. The park is open to the public all year around.  The Lake Hotel 1850 AD The Lake Hotel on the Muckross road with its fantastic views of the Lakes and the 12th Century McCarthy Mor Castle serves lunch daily, it also has one of the best places to see some historic images and documents available in Killarney … more Torc Waterfall Torc Waterfall is located just minutes from Muckross house and can also be accessed through Muckross Park. The waterfall is easily accessible and has a car park to the left, just before the waterfall. There are several scenic walks from Torc waterfall and Torc Mountain is also located near to the waterfall which is open to the public to climb.  Ladies View Ladies View is located between Killarney and the Kenmare road on the Ring of Kerry. It is one of the most scenic points in Killarney. It is overlooking the upper Lake & Islands, McGillicuddy Reeks.   At Ladies View, you will find A café, gift shop and a bar. Ladies View is named after the time Queen Victoria visited Killarney and she quoted it as “the finest view in the land”. Innisfallen Innisfallen is an Island in the middle of the lower lake (Lough Lein / Leane) Killarney. Here people can witness the ruins of Innisfallen Abbey, this old 7th-century monastery which was founded in 640 by St Finian. Lough Leane in English means “Lake of Learning and apparently, the High King of Ireland Brian Boru was educated here. There are boats available from Ross Castle daily except in the winter season. O Sullivan’s Cascade O Sullivan’s Cascade is located 5kms from Killarney town. It is an unmarked road as you drive towards the Gap of Dunloe. There will be a signpost for Lough Leane to the left, take this left and within 1.5km the surfaced road goes left after across a small stream. Go straight on and through the forest over the stile and the stream. Keep straight and follow the road through the oak woods. After 5km you will come to a stream and then a sign for  “ O Sullivan’s Cascade” which will lead you to a beautiful waterfall. Boat trips are also available on request from Ross Castle.
Tags: Boat., Dunloe, Gap, Honeymoon in Killarney, Images, Ireland, Kerry, Killarney for children, Photography, Scenery, Things to do in killarney, Top 10 killarney, What to do in Killarney

Boat Trips on the Lakes of Killarney