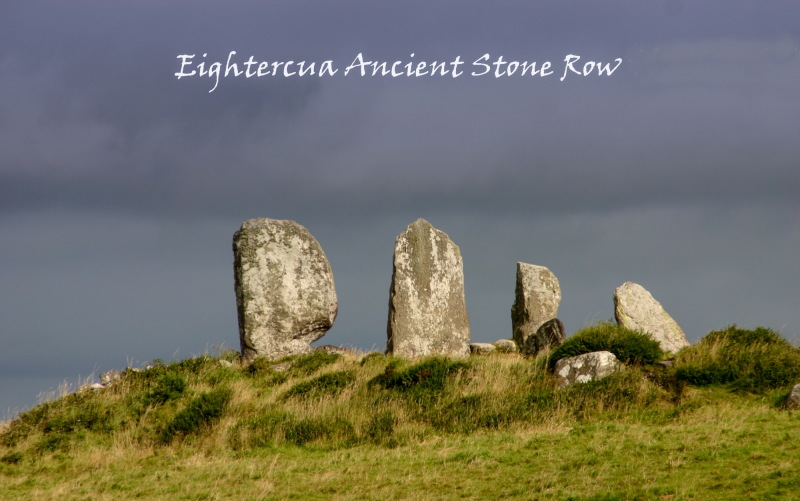 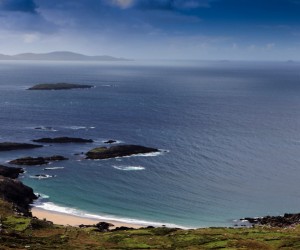 What can I say, the Ring of Kerry tour it is regarded to be in the Top 10 most scenic Day trip/drives in the World so went to see if would it stand up to the Mystic. We left around 10 am after a relaxing morning, breakfast a quick walk to McCarthy’s Castle just outside our window. It was a cloudy but bright day and we were so looking forward to our magical journey on the “Ring of Kerry”. Leaving Killarney we passed a beautiful Church called Saint Mary’s Cathedral and had a quick visit, we continued on to Killorglin and eventually, we stopped at the Kerry Bog Village halfway between Killorglin and Glenbeigh. The Kid’s loved it, the old “Famine” Houses people lived in in the 1800’s many of which left for the USA and Canada because of the failure of the Potato crop. There is also Bog Ponies here which the Kids could ride and there is a Pub next door called the Red Fox Inn.

After the Kerry Bog Village on the left, there is a magnificent backdrop of the meandering river and beautiful mountains which leads to an old bridge we will cross down the road. We arrived at Glenbeigh next to a nice village with a spectacular beach at Rossbeigh, we were told you can go horse riding and a  10Km Beach gallops here. We carried on our journey through the Ring of Kerry and around every corner there seems to be a better view.

After some windy roads with an Old Railway track on your left a high railway bridge and a Pub in the middle of nowhere called “Caitins” with views of Dingle Bay. Here we were told to stop at Daniel O’Connell’s birthplace on the left before you get to Cahersiveen and a museum in an old Police station / Barracks which was designed to be built in India only someone got the plans crossed. Beside the Old Barracks, we took the road to see two round forts and Ballycarbery Castle still standing even though blown up by Oliver Cromwell the Queen of England’s General.

After Cahersiveen we added the Skellig Ring to our day trip by taking a Car Ferry to Valentia a 10-minute crossing we even saw Dolphins and great views. The Skellig Ring is a great add-on to the Ring of Kerry and is for Cars and Mini Busses, Motor Bikes and Bicycles, it was highly recommended by our hotel and wow was it a great add-on to our day. On Valentia, we stopped at the Coffee Dock the Kids had hot Chocolate while we enjoyed a great Coffee. We also visited the Lighthouse, Tetrapod Footprints dating back 365 million years, 200 million years before Dinasaraus and a Grotto in a Slate Quarry with the most magnificent views. This is the Ireland we came to see and so interesting here on the Skellig Ring and couldn’t wait to see what comes next…

On Valentia, you can make your own candles which my Kids loved and nearby there is Ireland’s most remote Pub near Saint Brendan’s well used for a Guinness Commercial with “Next stop New York” painted on the side it is not a real pub but great for a photo shoot. One of the famous Trans Atlantic Cables to New Foundland in Canada in 1866 was laid from Valentia near Bray Head, it is at the west side of the Island and has a nice walk with great views of the Skelligs, two islands out in the Atlantic ocean. One Island was inhabited by Monks since the 5th Century, recently Star Wars was filmed here.

We stopped for lunch in the Moorings / Bridge Bar just off the bridge from Valentia as recommended by the Manager in our hotel, it was Seafood Chowder for us and Kids had Scampi and chips a favourite for most Kids.

We were looking forward to Saint Finian’s Bay and another view of the Skellig Islands where we were told if you call out “Up the Kingdom” local football slang at the Islands in the distance you will hear your echo return to you. Well, we did it but no echo today it was quite breezy. There is a nice surprise at the Bay when you are leaving there is a Chocolate Factory which is very interesting you can taste the chocolate and buy gifts to bring home. Make sure you see the Chocolate high heeled Shoe its a work of art, a quick note make sure your Kids behave or they will give them a Puppy and an Expresso to take away.

The Kerry Cliffs, nicer than the Cliffs of Moher ??

Be your own judge, many people prefer the Kerry Cliffs, looking out over Puffin Island, Little and Great Skellig Rocks. They are a way higher than the Cliffs of Moher, less touristy and have a safety railing which allows visitors to get that wow experience looking down 1,000 feet. It was amazing to stand over the West of Ireland and look out into the Atlantic Ocean from such a height, not to be missed.

Ballinskelligs next and McCarthy’s Castle at the Beach, to the left across the bay we could see Waterville, it will be our next shop. Arriving into Waterville we see old terraced houses on the left all painted different colours then a beautiful Church overlooking the Atlantic called Saint Michael’s and an interesting Museum inside with local History.

We come across a two Statues one of a Local Football star and one of the most famous men in history “Charlie Chaplin” a regular visitor in the late 1960’s and was a great friend of Billy and Mary Huggard who ran the Butler Arms hotel. It was Billy’s son at our Hotel gave us a heads up on Charlie Chaplin whose family still visit here regularly. We spent some time in Waterville and then travelled towards Caherdaniel and a visit to Derrynane Beach.

The Drive from Waterville is just magnificent, there is an Ancient Standing Stone row on the left just a short drive from the Village, and next stop is Loher Church, it has to be the most amazing place to get married, it looks down on the Atlantic Ocean wow what a view.

Coomakesta Pass is a little further on with great views and a big car park to get out and stretch your legs. This part of the Ring of Kerry is very scenic, our Kids at this stage want to get out of the car so we headed for Derrynane House and walked the beaches to an old Abbey nearly on the sand. Derrynane House is a Museum and was the home of Daniel O’Connell “The Liberator”.

We found Derrynane Sea Sports and our Kids rented Kayaks and went out into a safe bay for an hour and we relaxed on the beach and took photos here it’s very picturesque there. We will bring the swimsuits and towels next time and make a day trip here and so did we, even if it is raining there are walks around Derrynane House we even found some unusual Fairylike ornaments in the Gardens and woodlands of the house. Leaving the Village of Caherdaniel my daughter noticed a Riding Stables so we took a look and we got Lucky with our expecting to be doing a trail we were offered a half-hour trail over the sand as the tide was out, perfect as a family we had a private guide, Caroline who was very interesting. This was great now the Kids finally got to do things the like the best so we were all happy now. We left Caherdaniel & Derrynane with fond memories we passed a few good scenic points on the way even Ireland’s only Beach Bar and on to see Staigue Fort which is free to view this Ancient structure. We were running late enough and had booked our evening meal in the Lakeside Bistro at our hotel for 8 pm so we made our way back to Sneem and took a short cut to Moll’s Gap and left Kenmare for our next visit. We stopped at the Leprechaun crossing at ladies view for Photographs and left Muckross House, the Abbey for the next day, we did take a look at Torc waterfall which was very nice, it was a magnificent day and we will return.

I would just like to mention, the Lake Hotel in Killarney was recommended to me by my friend who is a travel agent and our trip To Ireland could not have been better, this Hotel and its staff made our Vacation, the information given by the Manager, the front desk and all the fun we had in the Pub and throughout the hotel. I did ask could we do a write up on the Hotel and Niall the Manager told me they were doing a web site with customers experiences on it and it would be great if we would add our Ring of Kerry experience so this was it.

Further reading and information on the Ring of Kerry