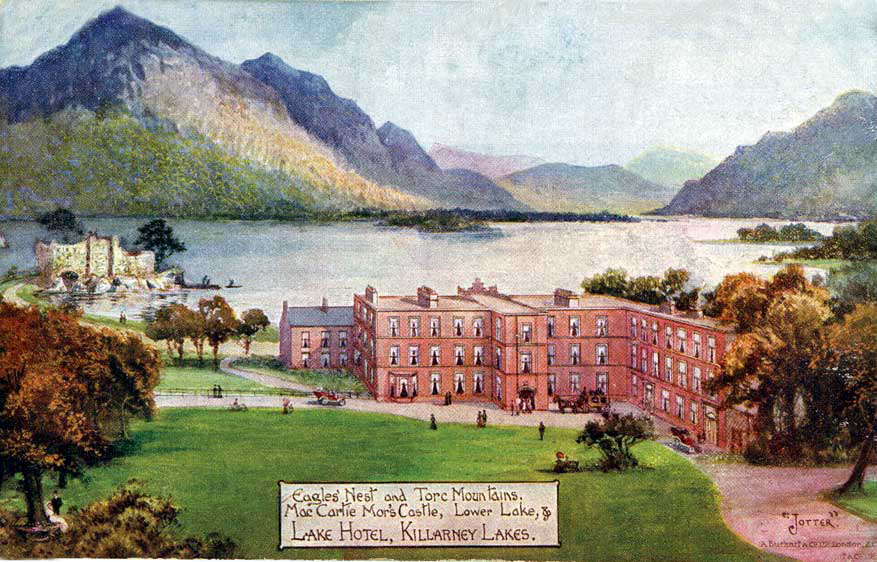 100 Years of Huggard History as an Irish family Run Hotel

Family Run Hotels in Ireland History a glorious chapter in a great Irish Tourism success story is being celebrated this year when the country’s first family-owned hotel chain celebrates 100 years in the hotel and tourism business.

The story began when local farmer, Martin Huggard, purchased the 28-bedroom Bay View Hotel, overlooking the seashore in Waterville, Co Kerry.  Later that year, Martin married Mary Doyle from Aughrim, Co Wicklow, who had trained in hotel management with the Great Southern Hotel Company. And so began the story that was to be at the centre of tourism and hotel development in the decades ahead.  It was not easy in those days – there was no tourism structure in Ireland and the country was going through political turmoil.

The marriage of Martin and Mary Huggard was a big success both on a personal and a business level.  They were blessed with seven children: Noel, Maudie, Hilda, Brendan, Cicely, Billy and Patricia.  Their children went on to leave a hugely positive imprint on Irish tourism in general and on the hotel industry in particular and this has continued through the generations.  Despite it being a ‘mixed’ marriage – Martin was Church of Ireland and Mary a Catholic – when Brendan decided he wanted to be a Catholic Priest, his father gave him his blessing by saying: “Brendan, if you want to be a priest, be a good one”.  And that became the Huggard motto:  “Whatever you do, do it well!”

As hoteliers, they were the perfect match.  Mary was renowned over the years for her unique warmth and hospitality while Martin was highly respected as the business entrepreneur.  A quote from her obituary in the Irish Times  in 1968 said: “The death of Mrs Huggard has removed from the Irish scene an outstanding personality; a woman of great heart and firmness of soul, of whom it can be truly said in the words of the poet, that she made no enemy and lost no friend.  Allied to these qualities were special traits, such as her acumen in business affairs, her vision, her courage and her tireless energy and all of these combined to make her a tower of strength to her husband in the conception of their plans which were to connect their names so closely with hotel development in this country.  The lead which they gave and the success which attended their efforts must surely place them among the pioneers of the hotel industry in Ireland”.

Their first move was across the road in Waterville when Martin and Mary acquired the 60 bedroom Butler Arms Hotel in 1917, having sold The Bay View. There they quickly earned an international reputation for excellence that attracted high profile guests including Royalty, Politicians, Ecclesiastics, Ambassadors, Sports stars and big screen icons including Walt Disney and Charlie Chaplin.  The Butler Arms was the starting point from where Martin and Mary acquired many other hotels.

The first acquisition was the beautiful Caragh Lake Hotel outside Killorglin in 1922.  The Caragh Lake Hotel, situated on the lakeshore, was one of the four original Great Southern Hotels.  The Royal Hotel on Valentia Island followed in 1927.  These three hotels were promoted as a group offering interchangeable meals and fishing.  Caragh Lake and The Royal Hotel, Valentia were owned by the Huggards until 1951.

The next expansion came at the start of World War 2 in 1939 when the Irish Government invited Martin and Mary Huggard to restore and run the old Guinness mansion of Ashford Castle in Connemara. Their eldest son, Noel (who had trained in both The Majestic Hotel in Harrogate and The Dorchester in London) subsequently bought Ashford from The Land Commission and transformed it into a Grade A Hotel which he and his wife Angela ran until 1970. Again, this hotel was home to many international guests and it was from here the film “The Quiet Man” featuring John Wayne and Maureen O’Hara” was filmed.

The following year in 1940, Martin and Mary bought the Lake Hotel, (established as a hotel since 1820) on the Lakeshore in beautiful Killarney from the Hilliard Family. The Lake Hotel was run for the next 50 years by Hilda Huggard, until sons of Billy and Hilda’s nephews, Tony, Colman, Niall and Joseph Huggard took over the management of the hotel to continue the line of Huggard Hospitality into a third generation. As well as owning and managing the Lake Hotel to very high standards, Hilda was a driving force in the development of tourism and amenities in Killarney and nationally. She played an important role in Killarney Golf and Fishing Club when it moved to Fossa and, as an enthusiastic bridge player, she founded local bridge clubs and hosted a very successful Bridge Congress at the Lake Hotel which continues to this day.

In 1949, Noel Huggard bought Ballinahinch Castle in Connemara from the Irish Tourist Board which he turned into a hotel still renowned for its wonderful fishing and surroundings.  Ballinahinch was subsequently sold to an American businessman.

Billy Huggard and his wife Mary took over The Butler Arms Hotel from his parents  where they continued the Huggard traditions. They ran the hotel until the early 1970s when Noel‘s son Peter and his wife Mary purchased it.  Peter and Mary are still involved in the business with their two daughters, Louise and Paula Huggard, now representing the fourth generation of Huggards at the Butler Arms Hotel.

The Butler Arms Hotel in Waterville and The Lake Hotel in Killarney are the two hotels still in Huggard ownership.

Both Martin and Mary Huggard were entrepreneurs with a vision.  The heritage that goes with this 100 year history is testimony to their business acumen.  They embraced the opportunity offered by the trans-Atlantic route of the Cable Station in Valentia Island and Waterville and turned a local hotel into an international destination that became the Butler Arms Hotel in Waterville.  The technology of the early 1900s has been used to effect with the generations that followed into the digital era of the 21st Century.

In turn Martin and Mary brought their commitment to hard work, their business acumen and their great sense of hospitality to each hotel they acquired and instilled these qualities in their children which have been passed down the line to the present generations.

The success of The Huggard hotels was even more staggering when you consider they were bought at a time of war and/or political instability.  All were bought between 1912 and 1949 which history shows were recessionary times.  No subsidies for hotels existed in those times!

The Huggard hotels employed and trained hundreds of local employees to very high standards over the decades.  These people contributed greatly to the success of each hotel and had great loyalty to their employers.  To this day relatives of those who worked with Martin and Mary call back with pride to tell the present generation where their relative worked.

Any training gained at a Huggard hotel equipped people to emigrate with skills to hotels and resorts; to shipping companies and tourism companies all over the world.  The Huggards also used their international relationships to place people abroad for further training.

Birth of Tourism in Ireland

In 1946, Mary Huggard was a founding director of the first Irish Tourist Board and later Fógra Fáilte .  Using her hotel experience for the better of others, she was also a member of the Executive Council of the Irish Hotels Federation for many years.   Mary and Martin also worked hard at their own expense to promote Irish tourism abroad.

Noel Huggard played his part as a Director of Bord Fáilte in the 1950/60s and also as a consultant advising hotel and guest house owners on how to improve their facilities.  Noel was also appointed a Director of the Irish Sugar Company, the fore-runner of Bord Bia with an emphasis the promotion of fresh Irish Food grown locally.