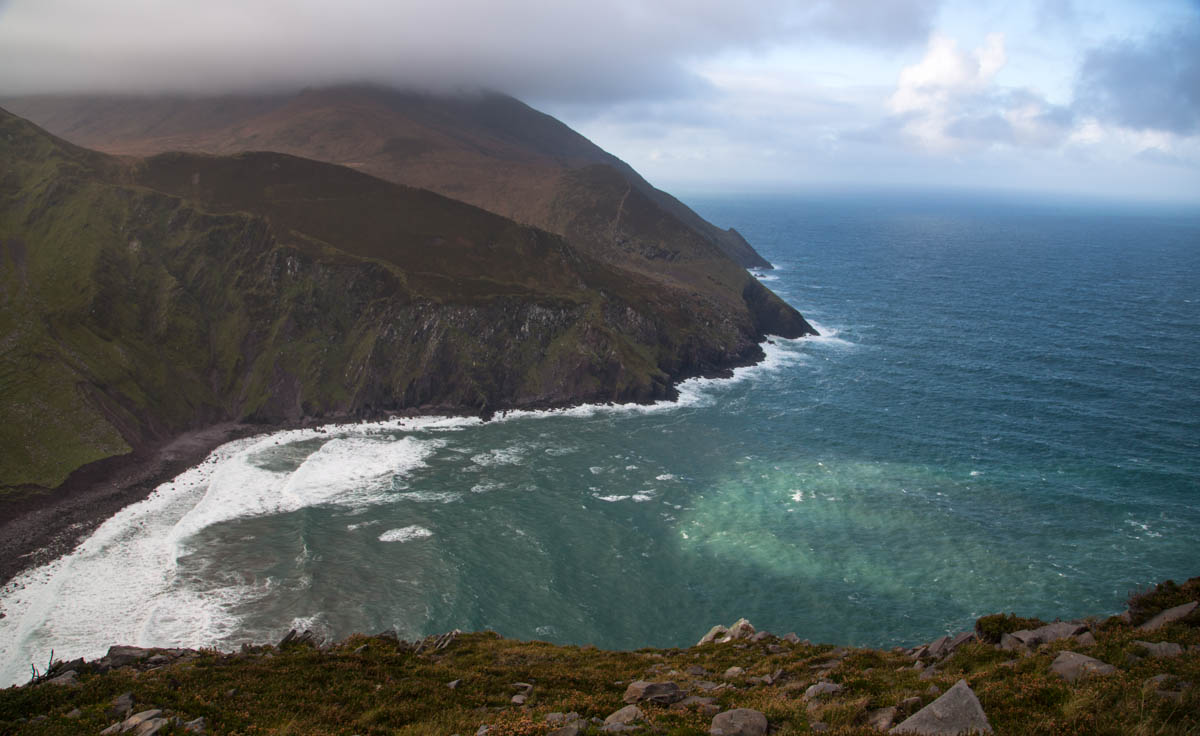 Barrels of Rum, Shipwrecks and no return for anything that goes in and add a landslide. I had been to Brandon Point before many times but this time I decided to trek over to Sauce Creek.

The walk close to the Coast is marked by poles a few hundred meters apart, its a fair walk with a lot of climbing and was very wet underfoot especially when you are away from the cliffs. On the trail, you will pass quietly a few remains of old settlements in different areas. It looks like it was well populated many years ago. When you get to Sauce Creek, it is spectacular, its horseshoe shapes its 300-meter cliffs the Atlantic waves breaking the wind and just the sheer space, it’s really amazing.

I continued down to the right side of the Creek where the views are even more spectacular and came across the famous landslide that took place in recent years (image) don’t go to close it is still quite unstable ground.

Climbing back up and I went the whole way around the Creek it was extremely windy and hard going at times especially when I was getting nearer the Ocean on the Westside, it gets quite steep at times and when you are close to being as far as you can go it is tough going on the heather. I had passed some serious open bog holes, some farmers had sheep wire to stop sheep from falling in so be careful of the open ones they look to be bottomless. Next, I went to another old settlement I could see to the South West it was hard going in the thick mountain heather and drops down into a valley. When I got there I could see what looks like trails which could have been made from a large number of wild Goats in the area but I would have preferred an easier way to get to where I was now. There is a trail which will bring you back to Teer and Brandon village by staying on the old roadway, but I picked a point midway over Sauce creek as my next point and continued so I could pick up the trail back to the car park at Brandon Point.

As you can see from the Image it is tough going on the Heather, to the left you have a great view of the landslide (image above) There is no doubt it is a very interesting spot, there was a settlement living in the Creek up to the 1800s and a recent storm washed much of the fields away.

As you walk the trails you will come across various old settlements in the middle of nowhere, you can only imagine what hardship they lived through in their daily lives, its no place for the weak, the weather and terrain is quietly inhospitable today with Gortex and Proper Boots, what was it like in their day. They were obviously great people and well able to adapt to the conditions.

When I got back to Brandon point I had 17 km on my walking app on my phone, i went of the worn pathways a bit but it felt hard going at times, if I were to do it again I would stay on the trails as we always learn the hard way and should know there are there for a reason.

Enjoyable but tough would prefer it after a dry spell, even more, amazing views so bring your camera.