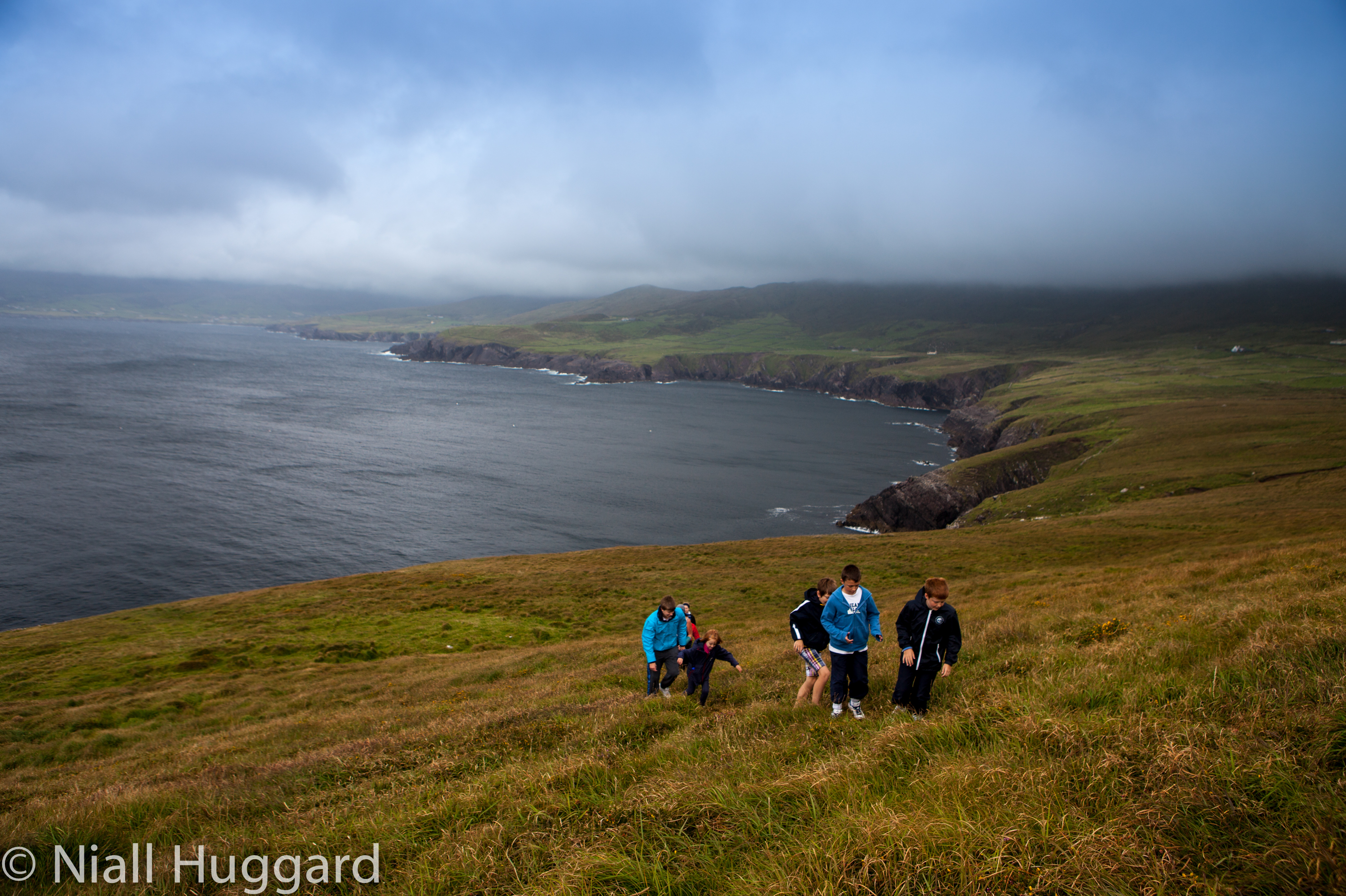 Saint Finan’s Bay is named after Saint Finian who founded the Monastery at Skellig Michael, today it is home to the new Skellig Chocolate factory.

In ancient times it is said it had close links with Tír na nÓg (land of youth) which in ancient Celtic mythology was the area around Ballinskelligs bay where Oisín and Niamh left Ireland for Eternal Youth, riding that great white horse across the water. Some say the Fianna along with Oisín is buried at Bolus Head as you descend towards Saint Finian’s Bay,  a row of Standing stones a couple of feet high marks the spot overlooking huge Cliffs leading down into the Atlantic Ocean. Old buildings can also be found here where our ancestors would have built stone wall dwellings usually a circle and would have used wood and earth along dead vegetation to make a shelter.

Fionn mac Cumhaill and the Fianna used to travel the four corners of Ireland, seldom stayed in the same place for very long. One day Fionn the Fianna and his son Oisín were hunting a Stag by the Lake in Killarney when a beautiful girl named Niamh who had searched the area to see Oisín, who was a noted as a warrior, poet and was very handsome. She had heard about him and when they met he could not resist her Goddess type looks and so went to join her in Tír na nÓg. Sad to let him go Fionn could see he had made up his mind and may come back one day, Fionn never saw Oisín again.

The next time he would return it would be in 300 years, he missed the Fianna and his family yet he knew the powers of Tír na nÓg but had to see his family, he missed all his friends and the life in the Fianna. Oisín had hoped to meet his Father but soon realised they were all gone only legendary stories of long ago to be found, feeling very lonely he headed back towards Tír na nÓg where he met some locals struggling with a big rock and with his great strength tried to help without getting off the horse but slipped and fell, he turned into a 300 year old man in a short time. He had been told leaving Tír na nÓg you can go and see but must not get off your horse or you will die.

The spot where Oisín fell is called “Bealach Oisín” or Oisín Pass and today is known as Ballaghisheen on many Maps of Ireland.

It is said they an old woman knew all the great stories of Oisín, Fionn & the rest of the Fianna, hunting stories, the battles they fought and rumours of where their secret Burial Ground was. In return for the white horse, Oisín was buried with his family 300 years after the time they had once ruled Ireland.

The Fianna were great Irish Warriors defended Ireland from many invaders, Fionn was one of the greatest but they say none could have matched that of the Fianna’s Greatest Irish Warrior known as Cu Chulainn